Looking through my pictures and I saw this. A reminder that even when things seem chaotic, we naturally tend to get through those difficult times. If it is too much for you today, Just let nature do its thing and hang on. It helps to focus on one thing. Just hold on.

The strong winds from a recent storm delivered dried up tumbleweeds all over my flower bed. In this picture,  a young flower struggles to open its petals against the weight of these twigs which for now seem to guard a prisoner. The thorny branches frame beautifully a delicate blossom as it opens its petals into the calm of a new day.

There is only one reason why I watch martial arts movies, the fighting scenes which Man of Tai Chi delivers with fluid and well choreographed techniques.  Tai Chi shows surprisingly well when its mostly defensive nature is put in an offensive light.

There is a great scene between our protagonist and his  Master where the contrast between the two methods is rather poignant. Against his Master’s advise,  Tiger continues to escalate his desire to show the power of Tai Chi as a fighting martial art, but in this scene,  he sorely learns that for this discipline,  control of oneself is vastly superior. At last, Tiger learns his lesson after he discovers the true intentions of his employer(Keanu Reeves) in the underground fighting business.

An added bonus of this movie is Keanu’s unintentionally comical performance.  The movie seems to have been written entirely for Asian audiences because even the English dialog sounds a little out of place, but I like the guy no matter what, so for me,  his presence was well worth it.

I give this movie three out of five stars because of the fighting scenes,  the great job they did in setting defensive against offensive techniques and for the plot which even with its predictability, manages to keep a good entertaining pace.

It is the perfect movie for those days when you’re awake in the middle of the night and your Netflix queue doesn’t seem to offer anything new, which is exactly how I found it. Just so you know,  I would watch this movie during the daytime as well, enjoy.

Lately, I have been writing my stories with Dubstep music in the background. At first I thought that the music would distract me because when I listen to it, every inch of my body seems to vibrate in elation, but for once, all the voices in my head quiet down and pay attention. It has turned out to be a great addition to my collection of wards against distractions, especially if I’m using headphones. I love the random techno chaos in its melodic dystopian tempo.
The name of most Dubstep artists escapes me all too often, but there is a marked uniqueness to the sound of some of them such as Nero, Skrillex, Daft Punk and the lovely Lindsey Stirling (Dubstep Pokémon). When their songs start, I run to see who is playing and I’m beginning to recognize them as if I was listening to their very own signature. Other artists however, I find repelling. It makes me think that they added the dubstep sound effects to their discordant melodies. Don’t get me wrong, their songs may be melodious but not very synchronistic with the Dubstep feel I get with the other artists and so I find them intrusive and at times obnoxious.
Not being an expert in the genre, I couldn’t tell you if their sound conforms to Dubstep standards, but my ears, greenhorn as they are in this territory, have made that distinction clear for me. Surprisingly, writing and Dubstep music are a great combination for me. Am I the only one with these quirky mixtures that help concentration? 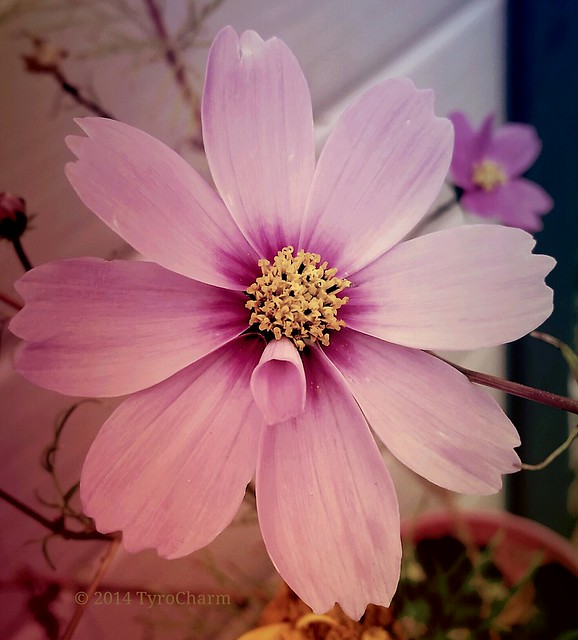 Although I have shared these pictures in other social sites before, I hadn’t realized at the time that I could also publish them here. These are some of the images that my little flower bed shares with me in the mornings when we spend some time together. They grew from an envelope labeled as wild flowers,  but I didn’t pay attention to the variety it contained so I don’t even know their names. Since last Spring when they started blooming,  I have taken hundreds of pictures, most of them saved in albums not yet named that were easily forgotten. Here and there, there were a few images that stood out and are now looking forward to making your acquaintance.

This morning I made a left turn against a big,  bright and prominent red light. “WTH!” I thought the moment screams, whistles and bells assaulted my absent minded thoughts as I proceeded to ignore the traffic light. My mouth uttered expletives that challenged the capacity of my subconscious mind to store information In the clandestine part of my brain where my rogue nature lies dormant.

Although this particular intersection is very busy, I made sure no cars were approaching in any direction. It must have been that sense of immediate security that prompted me to continue on my way. In that sense,  I seem to remember that a glaring bright red spot annoyed me a little bit as it would impress is shape on my vision when looking out for oncoming traffic. Obviously, my superior intellect in assessing a safe intersection did not required baby sitting attempts from an automated fixture.

It is amazing the kind of things that go through your mind in the brief few seconds that it takes a person to notice that the rear view mirror is indeed reflecting the shape of a real life police car. Of course the excitement of the moment wasn’t going to end after my left turn. However,  I am grateful to think,  that looking back on it,  the police officer must have been a little absent minded himself and was caught in the same stage of disbelief as he followed me into the intersection. He then proceeded to race around me, leaving me to melt into a medley of gasps, stutters and sighs. Good morning to you too universe!

When I recovered, I proceeded on my way to urgent care where I was going to in the first place, but that’s a different story.

The Daily Prompt asks, what is the one thing at the top of my anti bucket list that I don’t want to see for the new year? That would be a police car in my rear view mirror.

Very seldom, I take a picture that needs no editing at all, in my opinion at least.  Since I like to put a different air or feel to the images I take,  I’m pleasantly surprise when a picture captures a personality of its own. I took this particular one after a strong rain storm that left quite a lot of debris on my little flower bed.  The colors on this beauty seemed brighter and the shape of its petals, bearing the weight of raindrops, added a tone of distinguished endurance. To my eyes, damaged flowers in the background add a complimentary frame to their new leading lady.

This little bee stayed with me for a while.  It crawled from one flower to the next as I gave it a tour of my little flower bed. It always come back to the dandelion on my hand.  It made my day!

Blast From The Past

More Photos
NY Post Multisite
This, That, and The Other

In Design and Arts

Through The Smoking Glass, From The Ivory Tower!

Between Lines and Strokes

come check out my awesomness

Striving to be better one post at a time.

Life is either a daring adventure or nothing. - Helen Keller

The Literary, the Photography and the Joinery